So I talked a little bit about my explorations into planetary magick.

By my question was, now that I have been exposed to these energies and can invoke them, what do I do with them?

My original idea was to invoke planetary energies in such a way that I could compensate for harsh or difficult aspects on my natal chart. To a certain degree, this is still an objective, although I have different ideas on how to accomplish it.

The source material I am drawing on is Rosicrucian, so of course  it recommended that I channel this energy into attaining Knowledge and Conversation with the Holy Guardian Angel. And you know what? For once, that didn’t sound like a bad idea.

But mostly, I wanted those energies to have better expression in my life. And the invocations started me on that path. But the energies were undirected, and general in their manifestation. Sure, it felt good, but I wanted something more focused.

So I started designing planetary talismans.

I’ve been told that the designs I came up felt like lamens, and I did base a lot of my design from the lamens listed in my source material. But the ones that I consecrated were general talismans, and have been used as such.

(I constructed them from Sculpey, an oven-bake PVC “clay” compound that works for me due to finances, ease, and available colors.)

(Some of them burnt a little in the toaster oven. Oops. It doesn’t seem to be affecting them, but these are prototypes and I can be more careful next time.)

I haven’t consecrated all of them yet, and I should probably get on that, but I was more interested in proof of concept. I had small, consecrated items that were portable, or able to be installed as altar pieces, that embodied the planetary energies I wanted to work with.

So I played a bit more and developed some other ideas.

One of the things I wanted to “correct” on my astrology chart is the fact that my natal Jupiter, while in Cancer, is retrograde. I have since been educated further on astrology and learned that this is a very minor problem and really doesn’t need to be corrected, but not before constructing a talisman for this purpose. 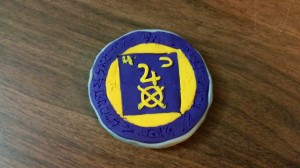 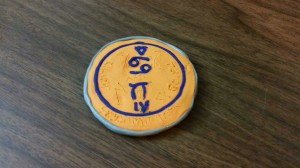 One side of the talisman is to Jupiter, and the other is to Cancer (I am starting to work with Zodiacal Magick as well, and I’ll talk about that it a bit.) Since it has not yet been consecrated, I intend to charge it as a more general prosperity and wealth talisman and keep it on my prosperity altar.

The idea of blending more than one kind of energy in a single talisman intrigued me. I figured that I could perform the Supreme Invoking Ritual of the Hexagram to invoke all of the planetary forces, and then consecrate the talismans according to what forces were best for their purposes. 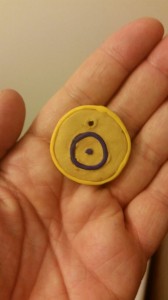 (This one is a general confidence or “social butterfly” talisman. It has elements of Venus and the Sun to inspire relaxed and casual self-confidence and general likability).

I also came up with the idea of banishing certain powers from the talismans, so that they would negate those energies. I got the idea while pondering the associations of anxiety astrologically. It makes sense to me that anxiety stems from an excess of Mercurial energy, and that reducing the amount of that energy and replacing it with an increase in Jovian energy (ever notice that both of the signs rules by Mercury are opposed by signs ruled by Jupiter?) would result in a more confident and less anxiety prone attitude.

So when I consecrated this talisman, I banished Mercury over it and invoked Jupiter into it. (Topaz is currently field-testing it, as she has anxiety problems and is enduring end-of-semester stressors.)

I’ve always been good at talismans, and using the planetary energies for them has inspired me greatly to develop new designs and ideas. The main principle here is that I can bring down these energies and implant them in an object that will make them available to me in times when I am not able to invoke them, or to other people who either do not have the time or ability to invoke them. (I am currently researching astrological indicators for mental illness, in the hopes that I can design talismans that will moderate symptoms of mental illnesses.)

Not only is this causing me to think in creative ways about how these energies are manifested in people’s lives and personalities, but it also allows me more opportunities to bring them into my life, as well as to help others. (It may also help me with that HGA thing, and may even provide a minor income stream as I get more deigns working.)

So in short, I have managed to adapt a talent at creating talismans to make use of these planetary energies. Which, I might add, is a very significant development, considering that my invocations to Jupiter were focused on inspiring such creative endeavors.

After Heartland Pagan Festival I plan on continuing my work with Zodiacal and eventually Sepherotic Magick, both of which offer very interesting possibilities for talismans.

So it appears that I have found a good use for these energies, which may have wealth and possibly enlightenment as side effects.

Check out my newest project, as I help create dynamic transformative ritual with other experimental magicians.